– The 4 division champions from each conference (the team in each division with the best overall record), which are seeded 1 through 4 based on their overall won-lost-tied record.

– Two wild-card qualifiers from each conference (the two teams with the best overall records of all remaining teams in the conference), which are seeded 5 and 6.

The first round of the playoffs is dubbed the wild-card playoffs (or wild-card weekend). In this round, the third-seeded division winner hosts the sixth seed wild card, and the fourth seed hosts the fifth. There are no restrictions regarding teams from the same division matching up in any round. The 1 and 2 seeds from each conference receive a bye in the first round, which entitles these teams to automatic advancement to the second round, the divisional playoffs, where they face the wild-card weekend survivors. The NFL does not use a fixed bracket playoff system. The number 1 seed will host the worst surviving seed from the first round (seed 4, 5 or 6), while the number 2 seed will play the other team (seed 3, 4 or 5). 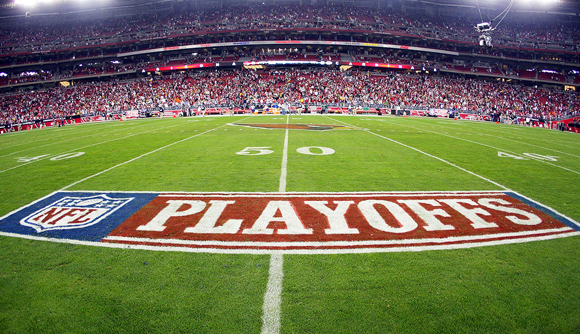 The two surviving teams from each conference’s divisional playoff games then meet in the respective AFC and NFC Conference Championship games (hosted by the higher seed), with the winners of those contests going on to face one another in the Super Bowl. Only twice since 1990 has neither a number one-seeded team nor a number two-seeded team hosted a conference championship game (in the 2006 AFC Championship the #3 seeded Indianapolis Colts hosted the #4 seeded New England Patriots with the Colts winning 38–34 and the 2008 NFC Championship the #4 seeded Arizona Cardinals hosting the #6 seeded Philadelphia Eagles with the Cardinals winning 32–25).

If teams are tied (having the same regular season won-lost-tied record), the playoff seeding is determined by a set of tie-breaking rules.

One potential disadvantage is that the two teams with the best records in a conference could play each other before the conference championship if they are in the same division. The better team would be seeded #1, while the lesser team would be seeded #5 as the top wild-card team, and as shown in the diagram, it is possible for the #1 division winner to play the top wild-card team in the divisional round.